Here is a great example of how a strong edit can salvage an otherwise unremarkable photo. The original had another photographer in the way and was too low contrast to be anything other than a quick snap shot; the artistic merit of this photo wasn’t very strong straight-out-of-camera. Enter Lightroom and a couple minutes of my time, and the final edit is a major improvement. 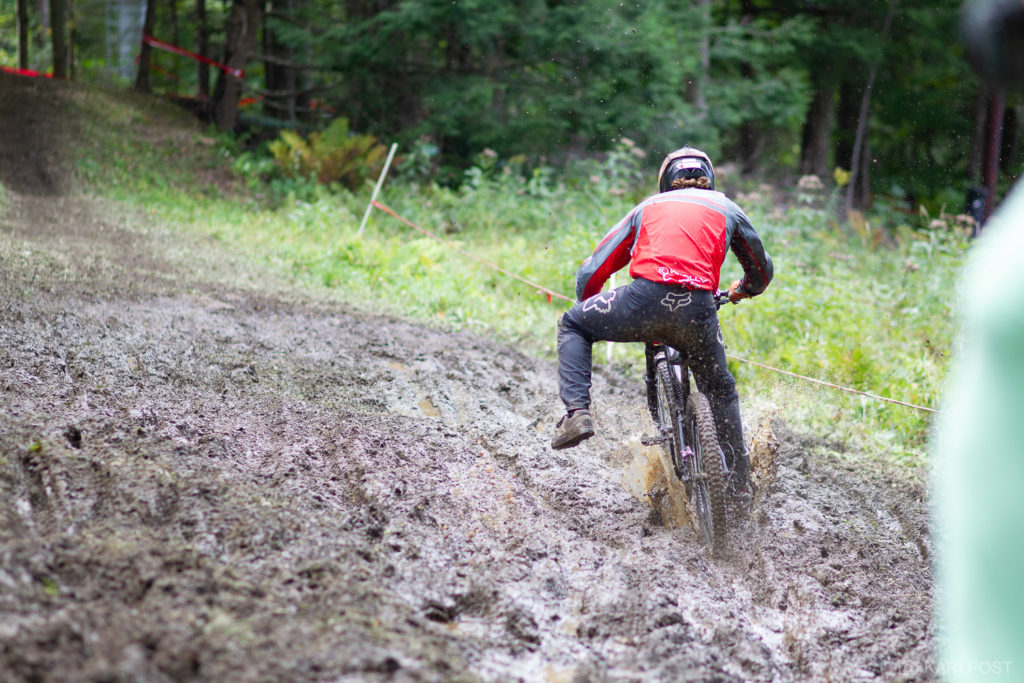 I started by cropping the image to eliminate the out of focus mint colored shirt on the right side of the photo. I also took a bit away from the top and bottom to keep the original ratio. Then I bumped up the contrast quite a bit to help bring out the textures in the splashing mud. I played with the vibrance and saturation levels and specifically tweaked the red color of the rider’s shirt just a little bit (I find the color red often blows out when you bump the contrast or saturation in a photo, so I had to selectively dial that back a bit), and then finally added a strong post-crop vignette in Lightroom. The entire process took less than a few minutes. 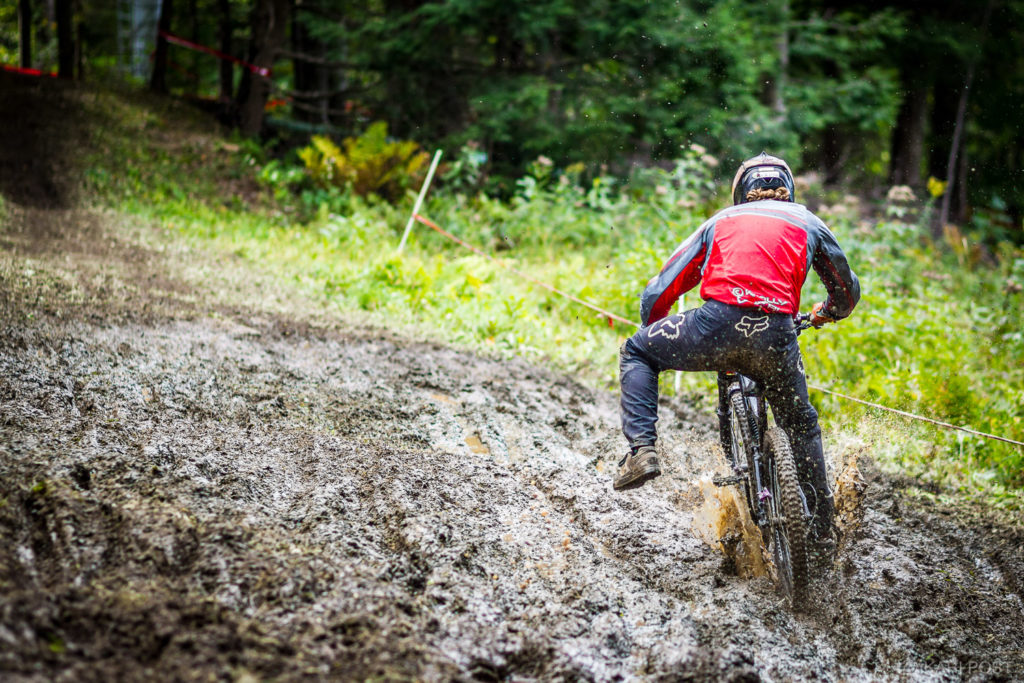 Fifteen or so years ago, I got my very first SLR, a Nikon N65. When I went digital, I purchased a Nikon D70, and a couple of years later a Nikon D200, before switching to Canon in 2007. I’ve been shooting Canon for the past decade, and have owned four different Canon digital bodies (1D Mark II N, 5D Mark II, 7D, and 1D Mark IV), as well as a Canon point-and-shoot and Panasonic micro four-thirds system.

I got away from shooting professionally several years ago, so haven’t given much thought to upgrading gear or dropping a few grand on a new body or lens. Its just not as much a priority as it used to be, and right now I’d rather get a new mountain bike than a new camera. However, I have started shooting more frequently again and have been doing more action photography and photographs where fast shutter speeds are required in low light. I know many folks shooting action sports and animals on the run aren’t using eight year old camera bodies, so I’ve started to look at what’s out there, and my how the times have changed.

In 2007, when I decided to sell my D200 and all of my Nikon mount lenses, I did so because I was shooting alongside Canon shooters who were easily able to shoot a solid two stops higher ISO with the same amount of noise, meaning when I was stuck at ISO 400 and getting blurry images, they could bump their ISO to 800 or 1600 and actually freeze the action of a moving subject. I was also getting to the point where investing in some long glass for wildlife was an obvious next step, and at the time Nikon didn’t have VR (vibration reduction) on any of their long telephoto lenses (the longest lens with VR at the time was a 200-400mm f/4) and their super teles (500mm and 600mm lenses) cost easily $2-3k higher than equivalent Canon lenses with IS (image stabilization). So I took a bold step, sold every Nikon specific thing I owned, and bought a Canon 1D Mark II N and 300mm f/2.8 with 1.4x and 2x teleconverters to make the switch.

I’ve been a happy Canon shooter for the past ten years and haven’t ever really doubted switching, or thought about switching back, until recently. Now, I spend more time shooting my mostly black dog in our tree shaded backyard or window lit home, or walking up ski slopes to photograph mountain bikers racing downhill through heavily wooded forests, sometimes at speeds of 30-40mph. In these situations, being able to bump my ISO even higher would allow me shoot at faster shutter speeds and get sharp, detailed shots of moving subjects even in low light situations. With my current cameras, I feel comfortable bumping my ISO up to about 1600, but know that the noise I’ll get in shadow areas will degrade significantly if I shoot at ISOs much higher than that.

In poking around to see how much ISO noise and dynamic range on digital sensors has improved in the past ten years, I stumbled across high ISO samples of the past two iterations of Canon’s two best pro level cameras, the pro-body 1DX and 1DX II and smaller-sized 5D Mark III and 5D Mark IV and, while better, they don’t come close to the shadow detail and clean high ISO shots of Sony’s cameras or Nikon’s D810 (and newly announced D850). So am I going to switch to Nikon? Probably not.

I have two Canon bodies, six Canon mount lenses, and two Canon mount teleconverters and extension tubes, including some pretty nice glass that I am unlikely to be able to replace for the price point I paid for it. Since switching to Canon, I’ve almost always bought used gear and often bodies that are at least one generation old. It would literally cost me thousands of dollars to make the switch. I don’t shoot professionally much anymore, so having the latest, greatest gear isn’t going to drastically impact my image sales or livelihood, and I’m unlikely to see a return on the investment I make in switching gear. Even with Nikon being ahead in dynamic range, ISO noise, and resolution, Canon still produces some amazing action cameras with high FPS and incredible autofocus. Many pro sports shooters are still using long white lenses, and let’s not forget that images made a decade ago on equipment at least as old are still getting published, winning awards, and making people happy. If Canon falls horribly behind Nikon and Sony in the years to come, I might switch back to Nikon at some point, but I’m not there yet.

I think it’s only a matter of time before the favor will switch back into Canon’s direction. Just ten years ago, things were completely different and I am pretty sure that Nikon and Sony aren’t going to just leave Canon bankrupt in the dust anytime soon. I would love for Canon to release an improved 1DX or 5D series model with higher megapixels and better dynamic range and high ISO performance while staying at a competitive price point and adding features like GPS, WiFi, multiple exposures, long exposure settings, and other features that come standard on some models. While I’m not entirely confident Canon’s next new release will rival everything already out there, I think it is coming. Over the years, when the playing field tends to tip in one direction, it swings back the other way in time. For now, I’ll probably keep my eye out on deals from all the other people jumping ship and switching from Canon to Nikon or Sony, and maybe I’ll buy a new camera when the next generation comes out and makes today’s most current Canon flagship cost half as much. After all, I love buying barely used gear for a fraction of the price. 😉